Antigone Exp. N°2 is a production of the music theatre collective AGORA, who work at the interface of music theatre and digital media, and the ensemble LUX:NM, known for combining opera with contemporary music and electronics. In the immersive augmented reality opera Antigone Exp. N°2 the audience becomes part of a choral scenography and is invited to move around freely or follow a particular protagonist. Each spectator’s experience is different depending on the individual choices, desires and impulses.

The individualised perspective is further enhanced by a digital augmented layer through which part of the story is told. Two cameramen, who are part of the theatrical scenography, film the live opera and stream the video with the included digital layer to the mobile phones of the spectators, forcing them to either look at the performance directly, or through their phones. Over the image they see on their phones they have no control, and is ultimately decided live by the director.

Antigone Exp. N°2 is based on Tommaso Traetta’s work Antigona, which offers an ideal template for the development of an individualised and immersive musical theatre performance. Here, the idea of the private immediate versus the digital indirect experience of a work of art and the moment of group dynamics are explored in greater depth. In addition to a variety of current references, which are linked to feminism debates and women’s rights movements, the choir, and thus a large group of people, form the musical centre of the work. Various choral passages that divide the work give it the character of a requiem. What is the choir, the crowd, this object so often described as a wild animal and so difficult to tame? What is the influence of a collective intelligence? How can one behave as an individual in the face of these powerful masses?

The 3D platform Unity was used to create an iOS app that two cameramen used to film the live augmented opera. The cameramen could place the AR on a particular location on the floor or on the wall at specific moments in time during the opera and start various animations. Tracking was achieved by using the AR Foundation classes with plane tracking technology. Signs were taped on the floor to help with the alignment of the real to the virtual. The live augmented image was then streamed via a VOGO app to a VOGO streaming server. The audience would connect with their smart phones to the streaming server by a rebranded VOGO iOS and Android app with which they could see the live captured augmented image. 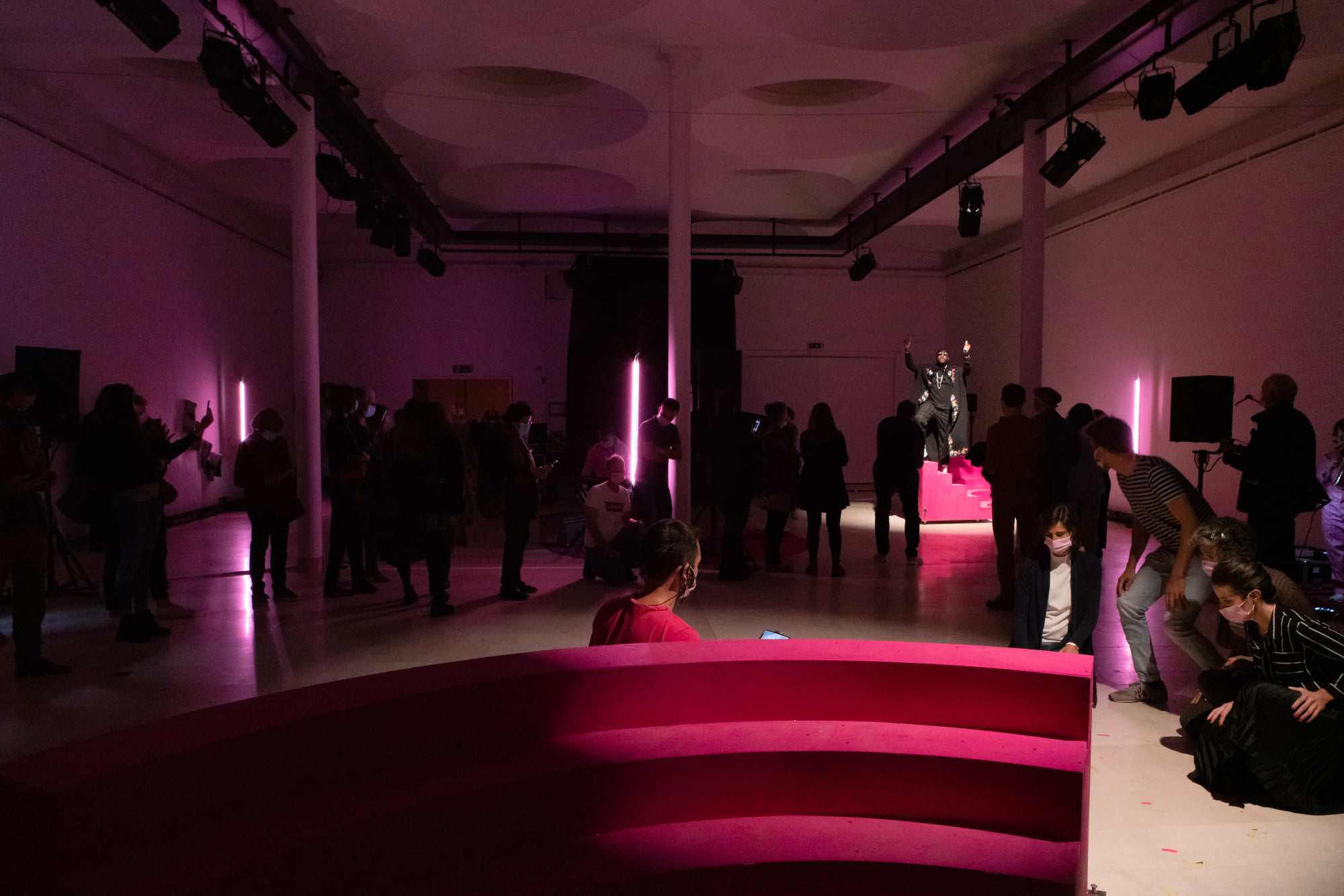 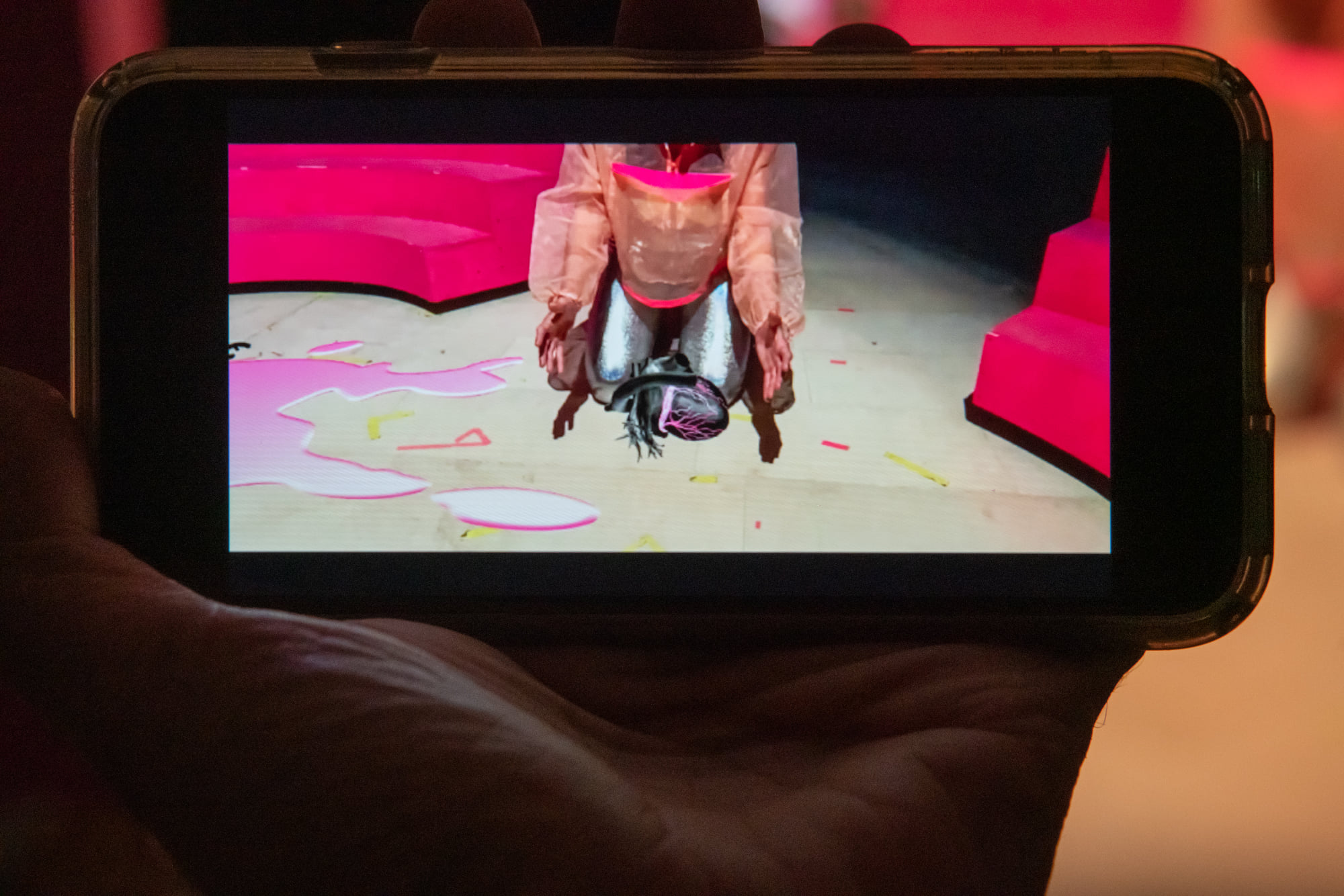 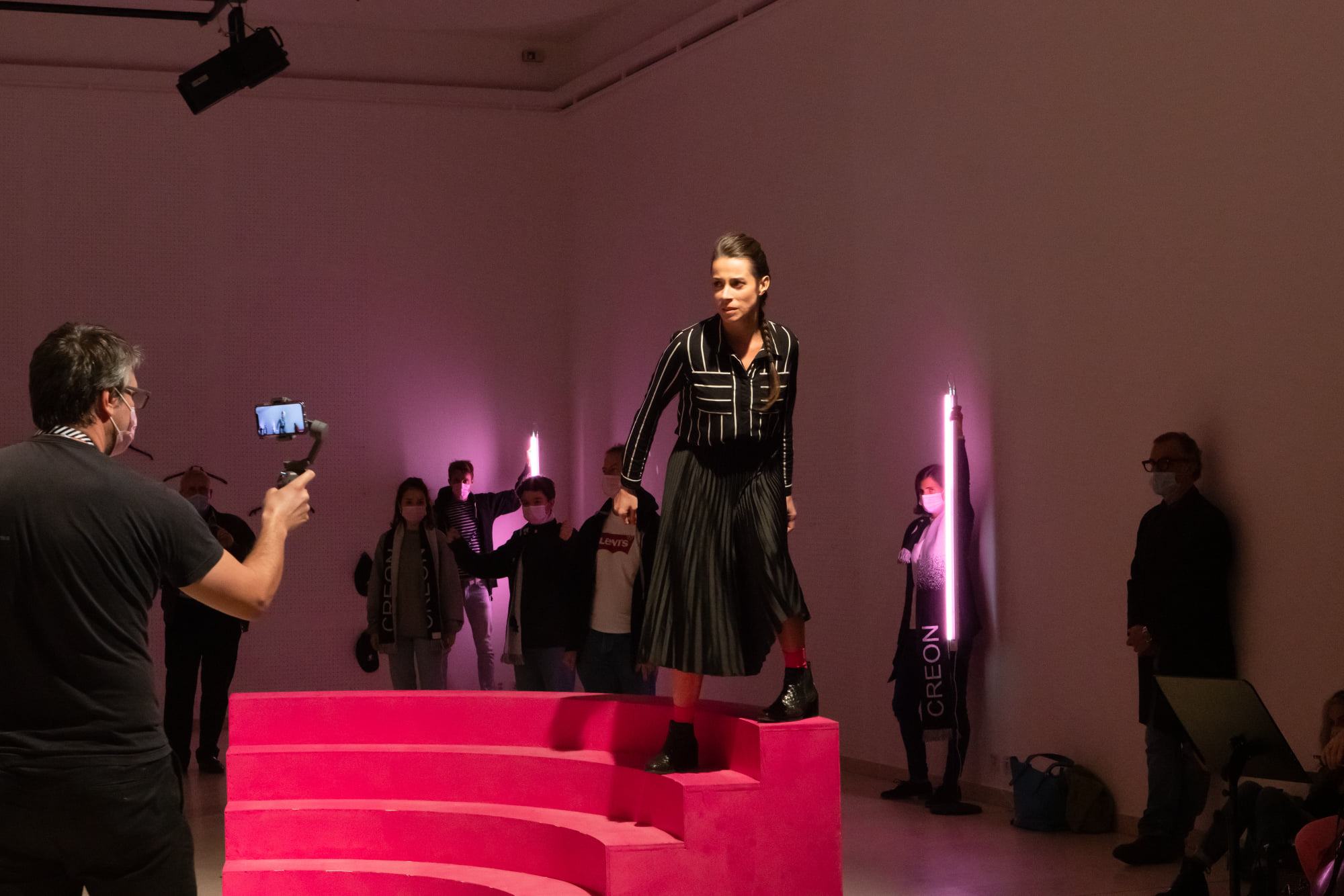 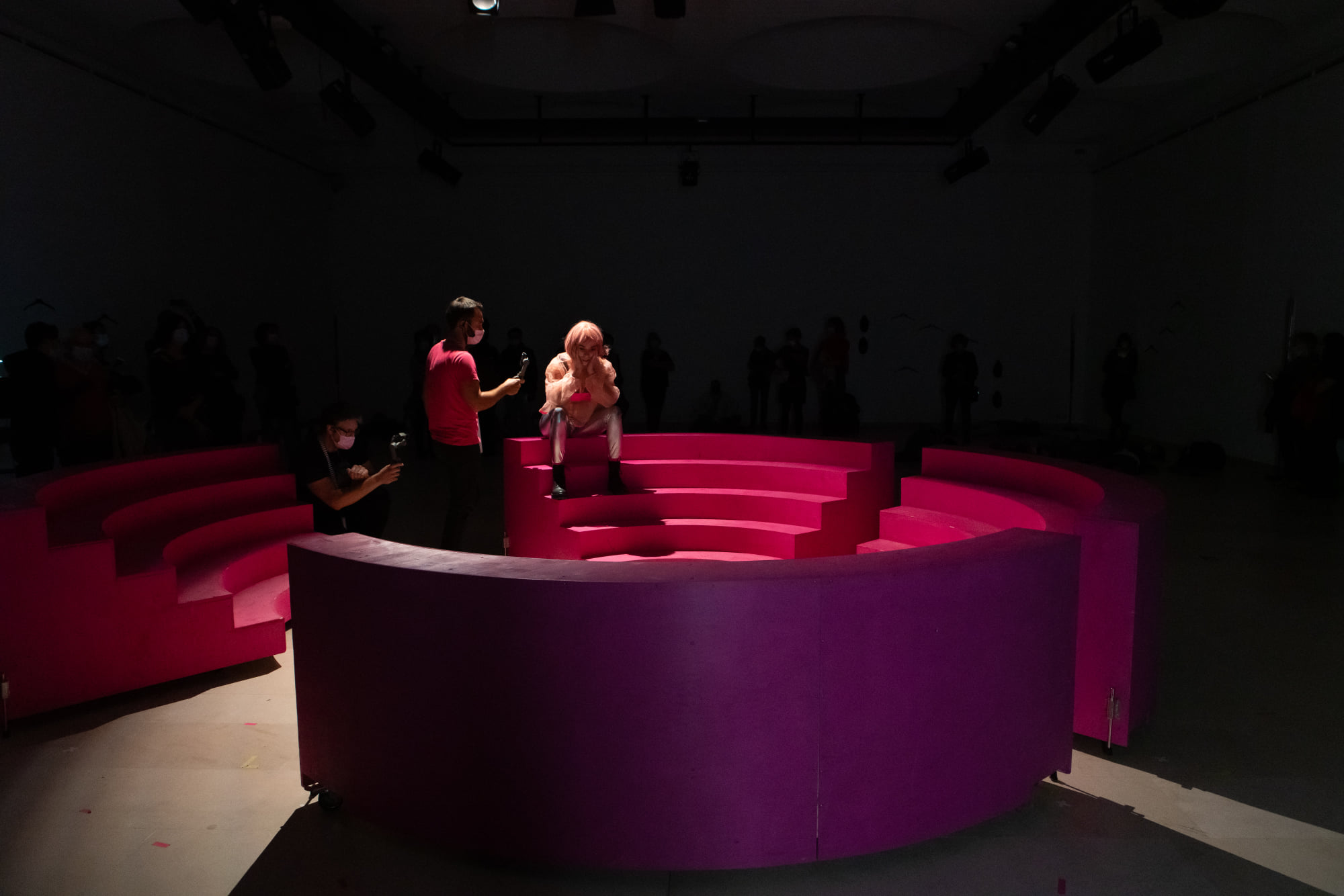 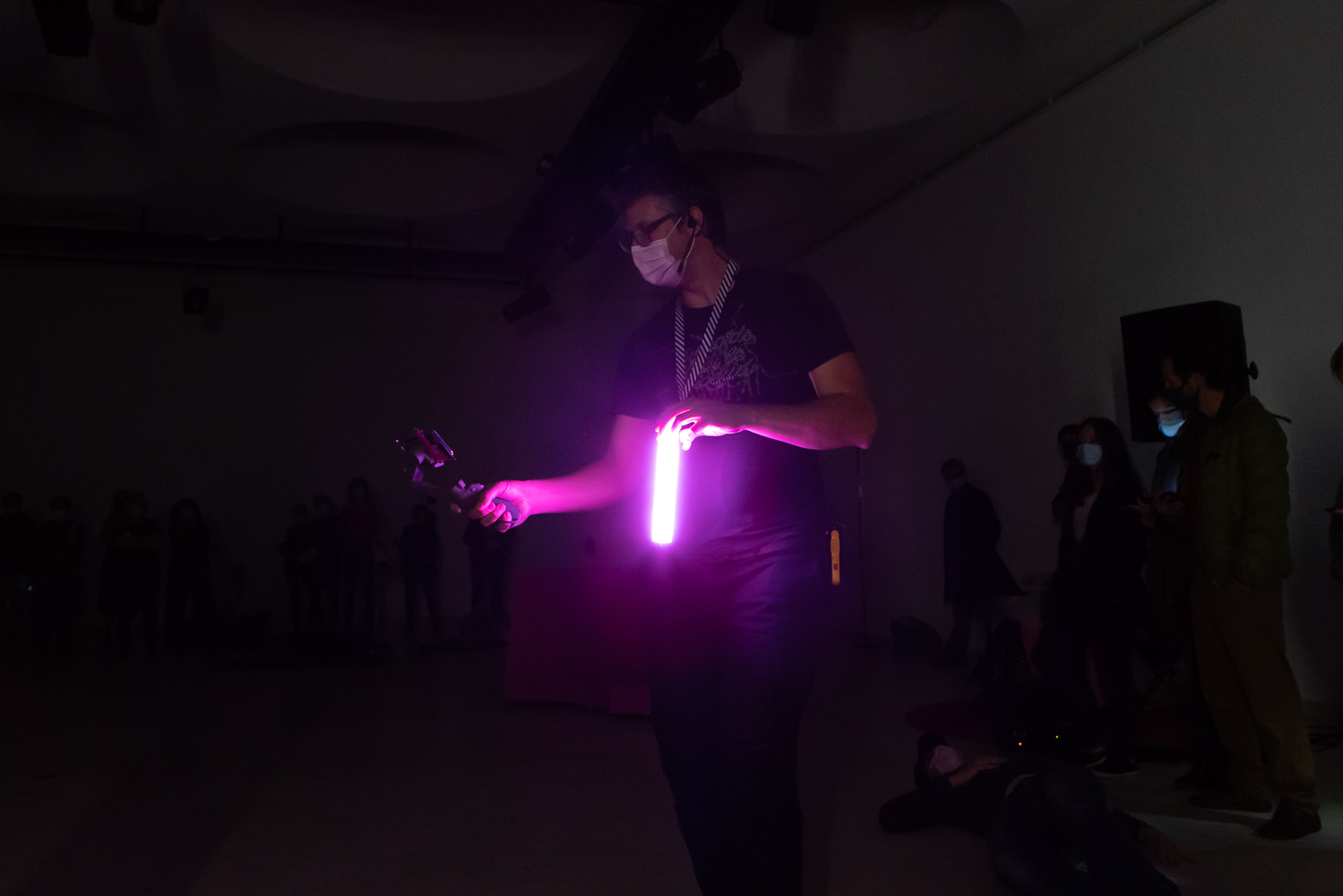 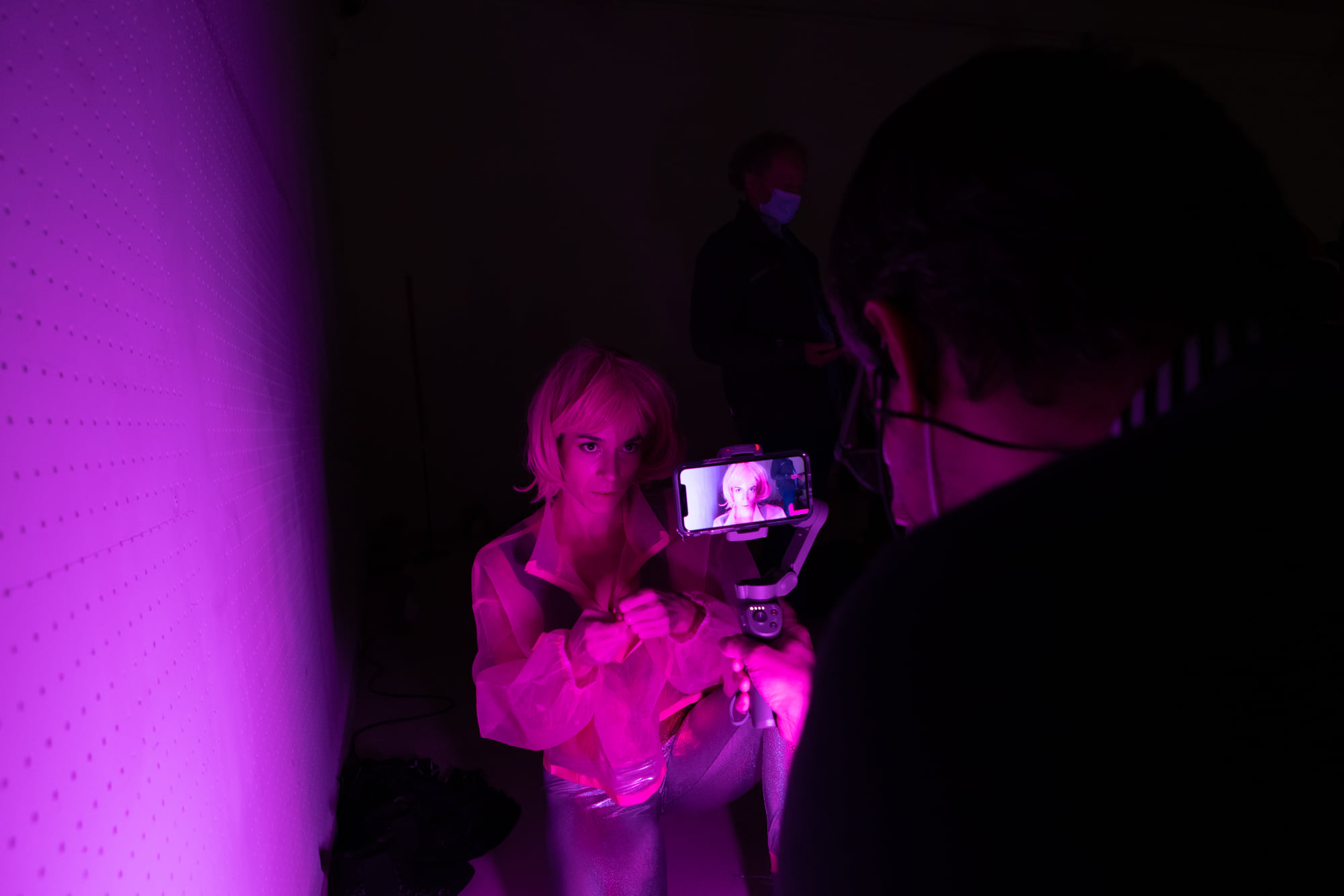