Politics On The Street

Through the Augmented Reality channel Politics on the Street the voting behavior of visitors to the catering industry becomes visible in the public space. The political preferences are linked to the facades of places of entertainment and addresses on the Rembrandtplein.

Approximately 100 passers-by and visitors of nightlife establishments at the Rembrandtplein are asked about their voting behavior during the elections of September 12, 2012 (two days earlier).

The political preferences are linked to the ‘facades’ of the relevant entertainment venues. Sometimes a surprising, but mostly confirming picture emerges: the left-wing pub Schiller (sp/green-left/pvda) and the right-wing nightspot Thorbecke (vvd/pvv)). It appears that linking political preferences to entertainment venues makes the political stratification, of a venue particularly explicit. In this respect, it is not surprising to learn that almost none of the interviewees indicated that they would not, or would indeed, visit the venues in question on the basis of the explicit political profile.However, the large percentage of PVV members in Thorbecke among the audience of Schiller café in particular gives an extra caveat to visit Thorbecke.

In the interviews, coupled with the inventory of voting behavior, the opinions on the usefulness and necessity of this information flow appear to vary. From ‘we shouldn’t want that in the Netherlands’ to ‘it is handy, then I know where I feel at home’. (The latter argument is especially used by foreign tourists and non-Amsterdam residents)

Although the objective of the project: stimulating a local discussion has succeeded. It appears from many of the answers that a larger research project, e.g. in combination with a qualitative research project, could have discussed the importance and impact on a broader level.

Politics On The Street is the result of a collaboration between designers Ruben Abels and Barbara Asselbergs of DesignArbeid and Luciano Pinna. 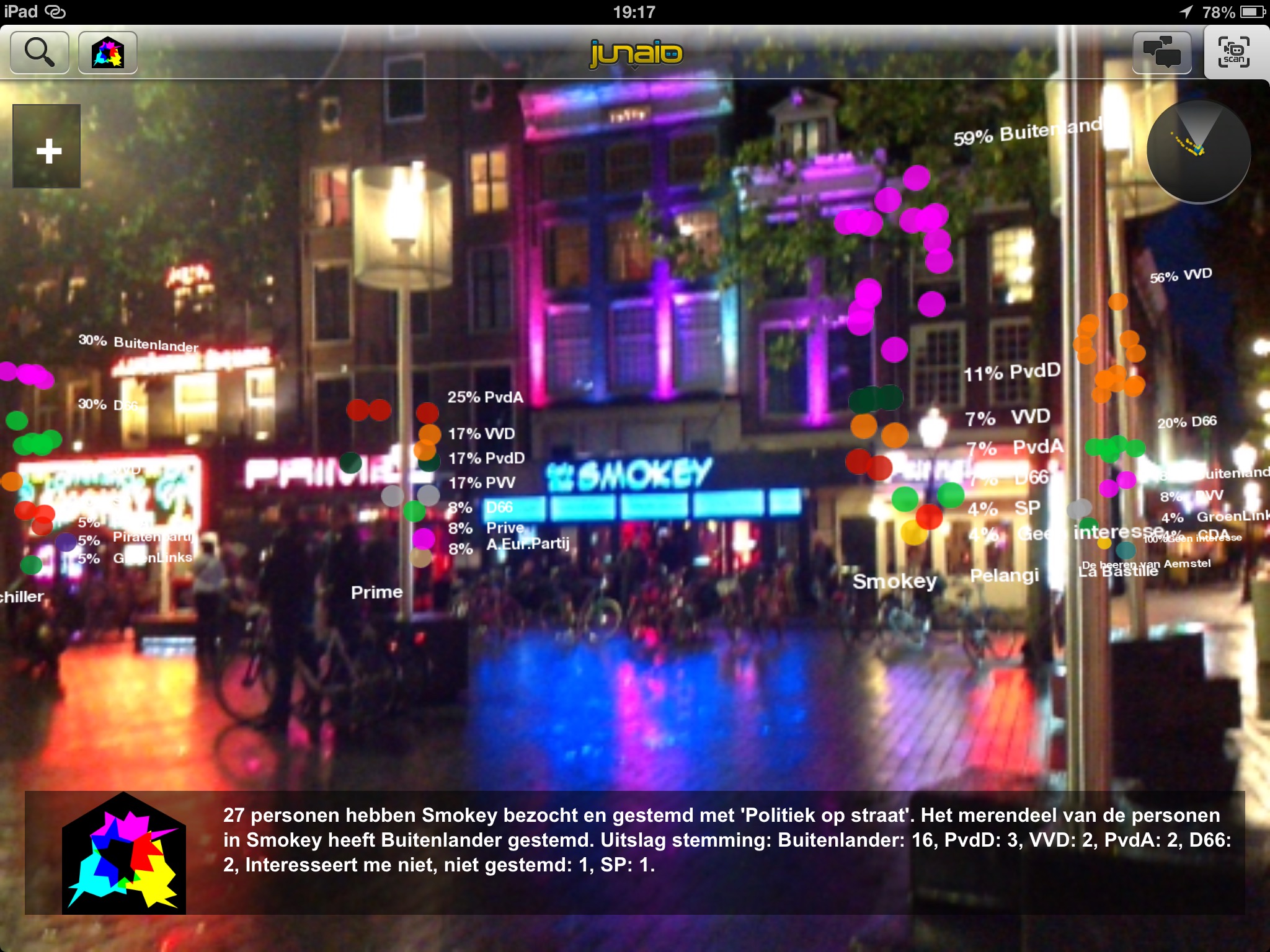 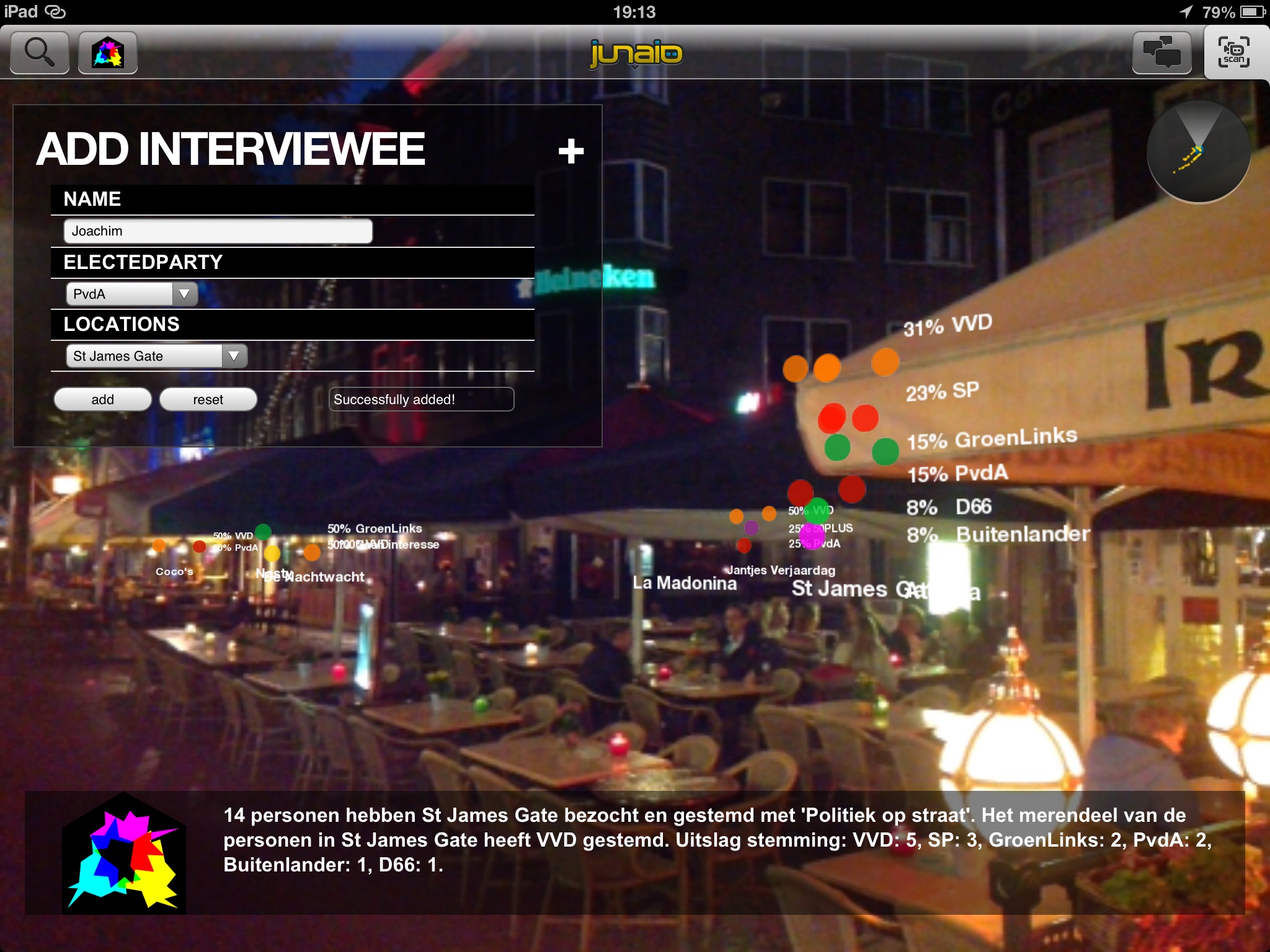 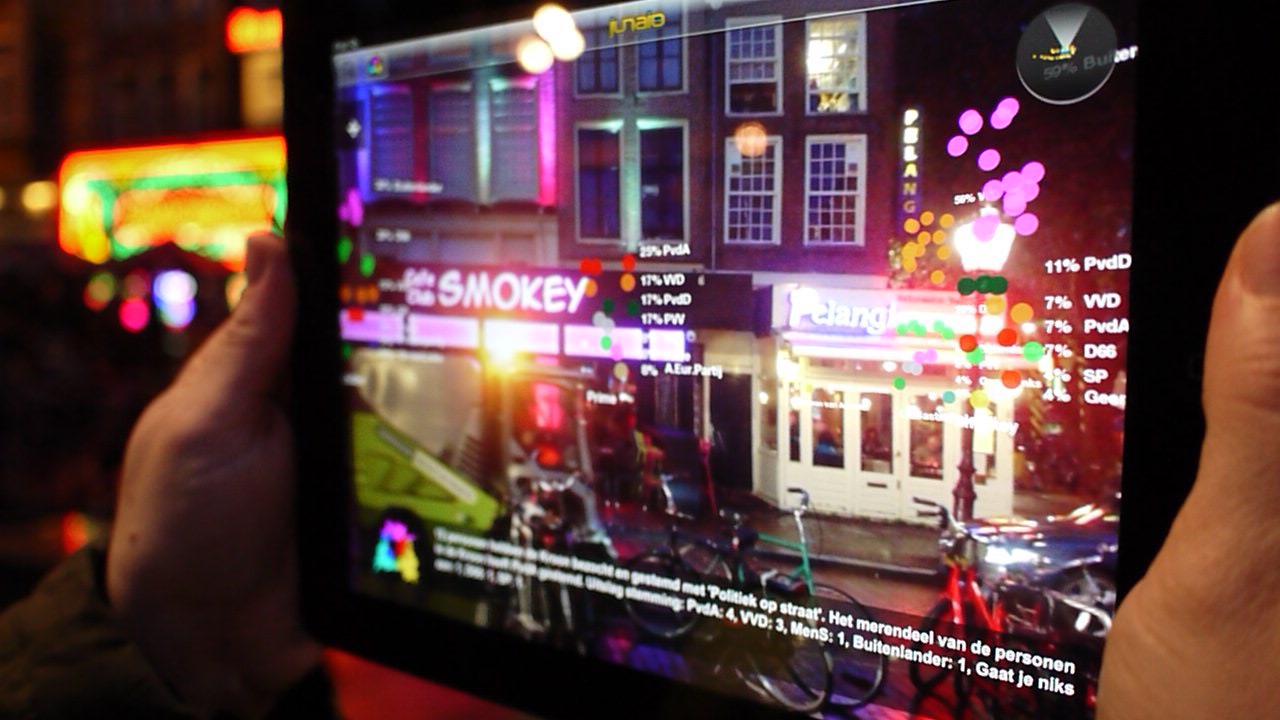 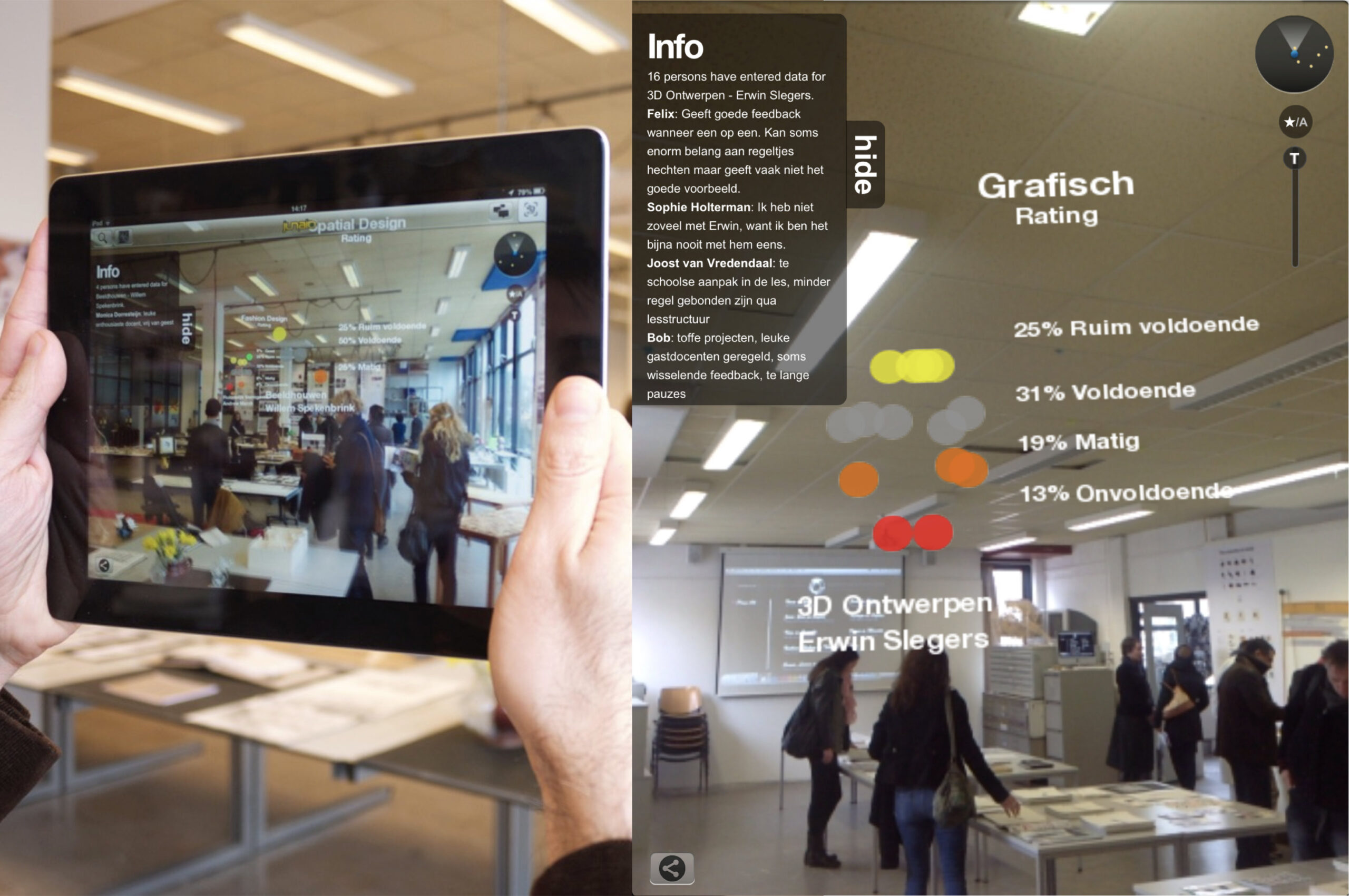 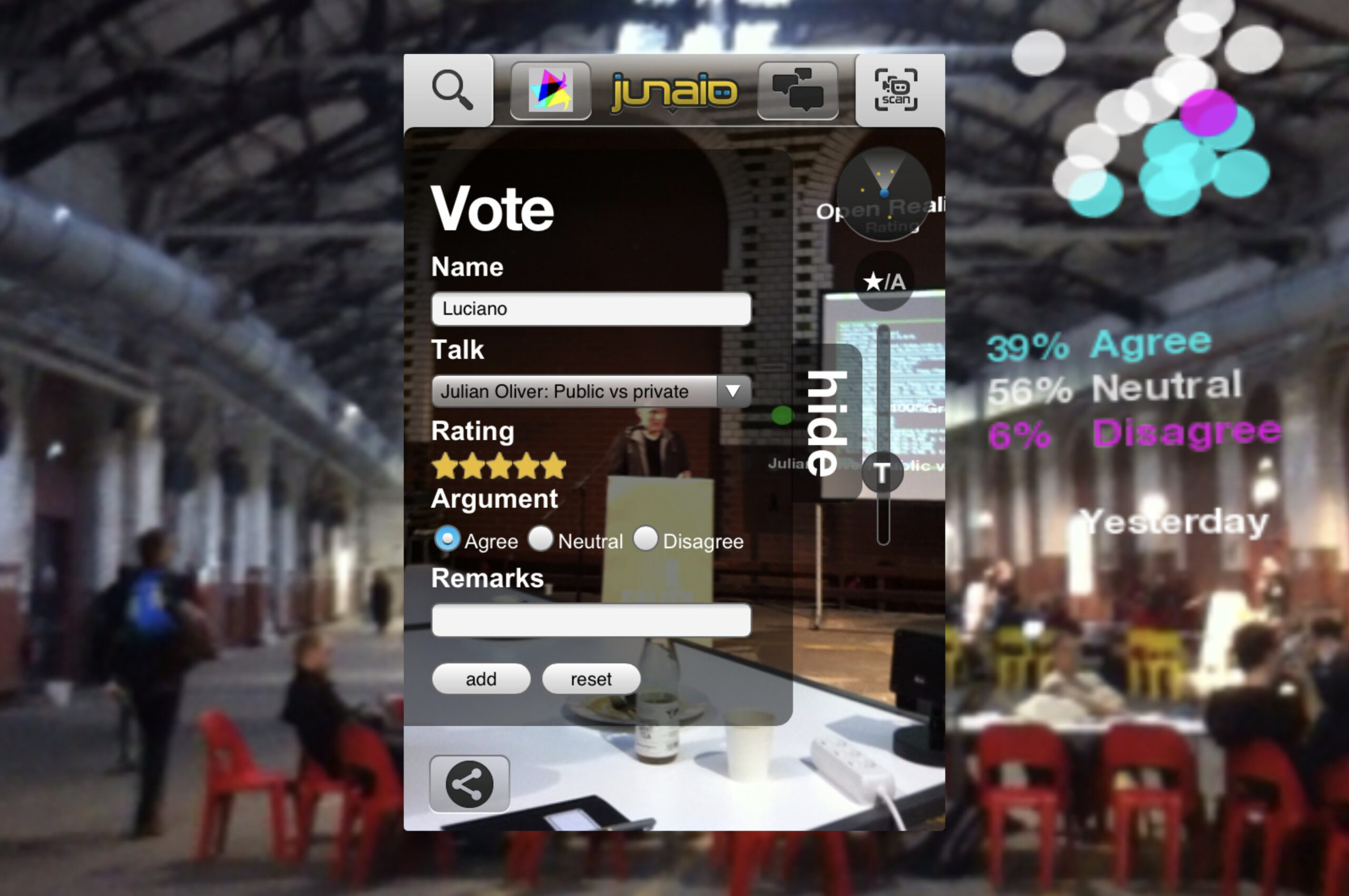 Participants to the Summit of New Thinking conference could rate the quality of the presentations by using their mobile phone or tablet. Votes were collected through an application created with the free AR browser Junaio. After entering their votes the results were displayed in realtime via Augmented Reality.